A Calm Living and Dining Space

This clients husband had already started taking wallpaper down and ripping carpet up before we had our first consultation, so I knew she was keen to make her space look better!

I knew this was going to be quite a big job. Although it wasn’t a massive space, it was the two hardest working rooms in the house and a thoroughfare from the hallway to the kitchen. The client wanted the arch taking down and the two rooms opening up, the tv mounting on the wall and a built in fire below.

This job would mean every trade – the electrics weren’t great (actually unsafe), the builder had a fair bit to do to knock out the main arch and also the one over the kitchen door, which to be frank, was just odd!

I’d also need to build out frames on the chimney breasts to house TV and fire in the lounge and then in the dining room where we’d discussed a few options. It needed to look balanced with the lounge anyway, so it was always going to be built out.

Storage was a big consideration as the client had a sideboard in the dining room and a TV unit, but that was about it. She also wanted a desk/small office type space so that she could put her laptop and paperwork away rather than it taking over the dining table. She didn’t need this as a permanent arrangement, so was happy utilising a dining chair and the space we were going to create in the chimney breast.

There was also the rather thick plastering that needed sorting out. Nice flat plaster please!! The coving also needed consideration as we needed to bring it around the two new chimney breasts we had created and the installer suggested putting it around the bay window in the lounge. I’m glad we did that as it definitely looked better afterwards.

Think of the expression “you have to break a few eggs to make an omelette” Before looking at the next few images. Suffice to say, the client moved out whilst this work was going on!

My idea was to run storage all the way across the two outside walls that linked the two rooms. This provided space for the things that once lived in the sideboard, and the TV requirements, such as the Sky box. The desk cleverly slid out from the chimney breast with a little push so she could simply use a chair from the dining table and pop it back once she was done.

Now, before any of this work started, we had already decided on how the space was going to look, obviously! My client had expressed a preference for spring greens but all of the tones she already had in the rooms (well, what was left of them) were warm terracotta type shades. I started down that route but it didn’t feel right to me. Her Pinterest board that we shared was erm, eclectic! There were a lot of different colours, but a lot of them were warm terracotta, oranges, and neutrals

Whist in London at the Spring previews/ new fabric ranges I came across this beauty from Harlequin and got excited because I just knew she would love it. 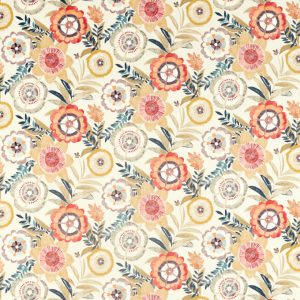 Now, I’ll be honest, florals aren’t really my thing but it’s not about what I like – it’s whether my client falls in love with it and she did, hooray!

So that formed the basis of the colour scheme and I knew we wouldn’t want to bring in much more pattern.  The were were a lot of chevron and herringbone floors on my client’s Pinterest board. She wanted to go for a luxury vinyl as she had dogs, so it was more practical. My supplier had a special cutting service where they cut each plank to an angle so that they could be laid in the chevron, it turned out brilliantly and the pale colour is just lush. 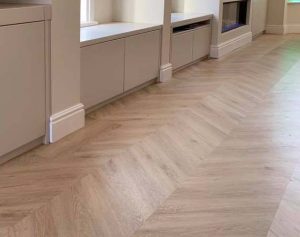 The storage was a triumph, thanks to my amazing cabinet maker Todd the desk in particular was awesome, popping in and out of the chimney breast with a gentle push. It did exactly what the client and I wanted.. 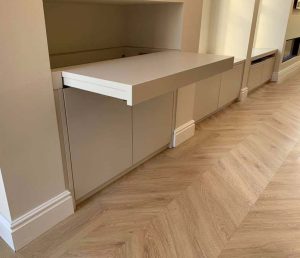 Overall, a happy client and a space that functions so much better than it did 😊 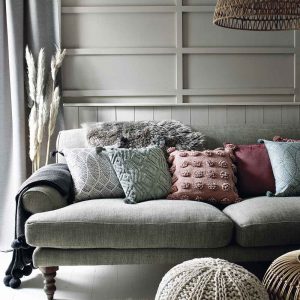 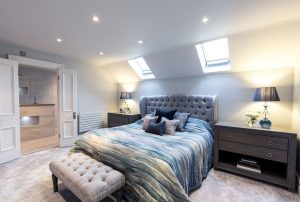 Here’s a behind the scenes look at a Master Suite project I undertook.. The brief… My clients were busy professionals and

Last year I made my own Christmas wreath. It was a lovely, fun filled evening (with quite a lot of Prosecco consumed, 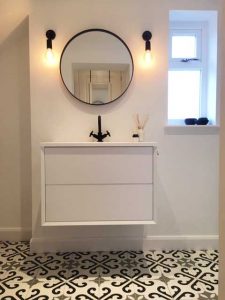 Our Autumnal Home Update Guide. It's free for you

Subscribe today and we’ll send you our essential guide completely free of charge. We promise you’ll LOVE it!